Megacolon is a term used to describe a very dilated, flaccid, incompetent colon. This usually occurs, secondary to chronic constipation and retention of feces, but may be a congenital dysfunction. Megacolon itself is not a specific disease entity, but it will usually result in obstipation (inability to defecate), since feces is retained in the colon in a larger diameter than is able to pass through the pelvis. The feces also become very dry and hard, as the colon absorbs water. Surgery may be required to treat this condition once medical management has been exhausted.

Megacolon is secondary to colonic inertia (functional obstruction) or outlet obstruction (mechanical obstruction). In each category, there are a number of specific causes. The most common cause of colonic inertia is idiopathic (meaning unknown cause) megacolon. Idiopathic megacolon is a disease in cats where the colon loses its normal motility and becomes progressively larger. As the disease progresses, cats lose the ability to defecate. The most common cause for outlet obstruction is obstruction due to poorly healed pelvic fractures, which impinge on the outflow tract of the pelvis and prevent the normal passage of feces. Tumors, strictures, and hernias of the rectum/anus can also contribute to the development of megacolon or constipation.

Cats affected with idiopathic megacolon are usually between 5–9 years old. Diagnosing the condition usually happens long after constipation has been present, especially in a multiple cat household, or when cats are indoor/outdoor. In these cases, owners may not be aware of their cat’s normal bowel habits.

Cats affected by megacolon may show the following signs:

The stool present in the colon is large and firm, and is easily palpable (a veterinarian can feel it easily). It is important that your veterinarian perform a rectal exam to check for old collapsed pelvic fractures, obstructive masses, or hernias located either inside or outside of the colon or rectum.

Diagnosis of megacolon is based on history and physical exam, and is confirmed with radiographs (x-rays) of the abdomen. The diagnostic work-up should also include blood work to rule out any metabolic abnormalities. Radiographs can confirm the presence of a large colon (Figure 1) and can be used to determine if there are any old pelvic fractures (Figures 2 and 3), masses, or spinal deformities. Abdominal ultrasound, contrast studies of the lower gastrointestinal tract, or colonoscopy may also be needed to determine cause of the condition. The final diagnosis of idiopathic megacolon is made by excluding all other causes of constipation. 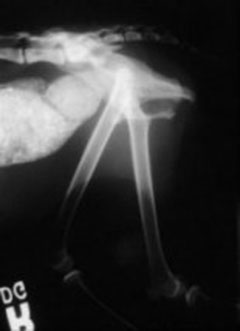 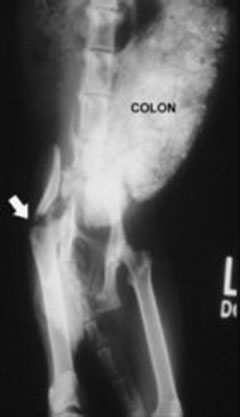 For idiopathic megacolon, initial management is medical. These cats should be appropriately hydrated (IV fluids if dehydrated), then an enema, and deobstipation (manual removal of feces) should be performed. This almost always requires general anesthesia, as it is extremely painful for an awake cat. NEVER attempt to give a cat an enema at home unless instructed by your veterinarian, and NEVER use an over-the-counter Fleet phosphate enema (infant enema), which is toxic to cats.

After  the stool has been removed, medical management begins. In the past, a high fiber diet and bulking agents such as Metamucil and fiber pills were recommended in an effort to make the cat more “regular.” These are actually contraindicated and can worsen the signs. Best medical management includes a low-residue diet (your veterinarian can suggest low-residue prescription diets) and prescription medications such as lactulose and cisapride. Lactulose is a mild cathartic (helps speed defecation) and is a stool softener. Cisapride stimulates colonic motility (propulsion). The low residue diet helps to stimulate the colonic cells without increase in bulk. Most cats will initially respond to this therapy, but some will eventually become refractory to treatment. When medical therapy is no longer effective, surgery to remove the enlarged colon is recommended.

The surgery is referred to as a “subtotal colectomy” (removal of most, but not all, of the colon), although occasionally a total colectomy (removal of the entire colon) is required. Before surgery, your pet may be started on antibiotics, because the colon, containing feces, is the most bacteria-laden part of the intestinal tract. Antibiotics help to prevent bacterial infection at surgery.

In subtotal colectomy, the entire affected colon is resected (cut out) and the two remaining ends are sutured back together. Failure to remove an affected portion of bowel can cause formation of a new dilated area of bowel, leading to recurrence of clinical signs of constipation and obstipation. Sub-total colectomy is a challenging surgical procedure.

Cats with pelvic obstruction secondary to pelvic trauma can be treated by removal of the abnormal pelvic bones (pelvic ostectomy) to allow normal passage of feces again. Unfortunately, if the megacolon has been present for greater than four to six months, dilation and loss of function may be irreversible. The colon is not able to return to normal function after this extended period of time. Therefore, most cats with impinging pelvic fractures are also treated with the same surgery (subtotal colectomy).

Postoperatively, antibiotics are often continued and cats are closely monitored for infection. Soft stools and occasionally diarrhea can occur for the first few months after surgery. Progressively, the stools become more formed, but rarely ever become normal. Cats are not incontinent following subtotal colectomy, but may occasionally drop a small piece of soft stool on the way in or out of the litter box as they are adjusting to their new life post-constipation. Postoperative constipation has been reported, but is rare and is usually treated successfully with medical management Rarely, cats require a second surgery if not enough colon was removed the first time. The vast majorities of cats have excellent quality of life and do not need special diets or medication.