In dogs and cats, lung lobe (“pulmonary”) tumors are most frequently a result of cancer cells that have been carried by the blood stream and into the lung tissue. These types of tumors are called “metastatic.” Primary lung lobe tumors — tumors that originate from the lung tissue — are much less common. Most come from glandular structures, known as “adenocarcinoma” or “bronchogenic carcinoma,” but they can also come from portions of the lung tissue that provide support, such as:

Dogs and cats that live in a household with smokers, or in environments high in some pollutants, such as asbestos, are at an increased risk for developing primary lung lobe tumors. Brachycephalic breeds (bulldogs, pugs, etc.), with their flat noses, are also at a greater risk than long nosed breeds.

Tumors that are large or compress vital structures can cause difficulty breathing or regurgitation, where food comes back up suddenly after eating. Some dogs and cats may have lameness because the lung lobe tumor has spread to other sites or has caused swelling and bony reaction along the toes and lower bones of the leg, known as “hypertrophic osteopathy.” 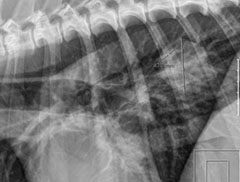 Lung tumors are diagnosed on x-rays or computed topography (CT) scan of the chest (Figure 1). Lung tumors are hard to see on an x-ray until they are at least a half inch in diameter. Tumors that are large or close to the chest wall can be sampled with a needle and syringe; the samples are then examined under a microscope to determine the type of tumor. Because most animals are older when they are affected, their blood work and urine are evaluated for evidence of other illnesses. Screening tests, such as an abdominal ultrasound, to evaluate for a primary tumor elsewhere in the body may be recommended.

Single lung lobe tumors are removed surgically, either through a large incision in the side of the chest or through minimally invasive techniques with several smaller incisions and the help of a thoracoscope. Patients found with multiple lung lobe tumors most commonly have metastatic disease, i.e., cancer spread from another site, and alternative treatments such as chemotherapy can be considered.

Cats and dogs have two lungs, the right and left, and each lung is divided into several lobes that can be removed separately. Most lung lobe tumors are removed through an incision in the side of the chest, known as a “thoracotomy,” just behind the front leg. The incision goes between the ribs, which are spread apart and then brought back together once the lung lobe has been removed. The blood vessels and air tube (“bronchus”) to the lobe are either tied off with suture or with a stapler. Staplers are usually used since they are much faster and easier than suture closures.

A chest tube is placed to remove any fluid or air from the chest cavity after surgery and for infusion of local anesthetic to reduce pain. Chest tubes are usually kept in for 12–24 hours after the surgery. Since these surgeries can be painful, multiple types of pain preventives and treatment may be used, including:

After the surgery, your pet will stay in the hospital until the chest tube is removed, he/she is breathing well and their pain can be managed with oral medications. Exercise is restricted for 10–14 days to allow the surgery site to heal. Some dogs may wear a bandage for 1–2 weeks after the surgery, or a collar to prevent licking or chewing at the incision. Depending on the type of tumor, which is based on microscopic examination of the removed tissue, chemotherapy may be recommended. Also, your veterinarian may suggest x-raying the chest in future visits to check for spread or recurrence of the tumor.

Anesthesia can be risky in any older pet, but the risk increases in pets whose airways are diseased. Many pets must be placed on ventilators during the surgery to keep them well oxygenated. Bleeding or air leakage can be a potential problem if the blood vessels or bronchus do not seal properly. Pain medications are necessary for several days after the surgery; animals that are in pain will not expand their lungs well and could suffer from low oxygen. Despite these potential complications, most dogs and cats survive the surgery.

Because the surgery site is directly behind the front leg, some dogs may have trouble walking (particularly up and down steps) for up to 2 weeks after surgery, and many will have swelling along the incision line for several days after the surgery.

Survival after lung lobectomy for a primary lung lobe tumor averages one year or more in many cases. Survival is longer when the tumor is smaller or located on the periphery of the lung lobe (15–17.5 months), when the lymph nodes are small (20 months) and when the tumor can be entirely removed. Survival also depends on the tumor type and is longer in dogs with adenocarcinomas that are completely removed (19 months) than dogs with squamous cell carcinomas (8 months). The best prognosis is in pets that have small diameter, well differentiated papillary carcinomas that are diagnosed before clinical signs occur and that have no evidence of lymph node spread. Cats are much more likely to have spread of their primary lung tumors, so their prognosis may not be as good as dogs.

Since breathing second hand smoke can increase the risk of lung tumors, the best prevention available is for animal owners to stop smoking. Even when owners smoke outside, the smoke is brought in on their hair and clothing.