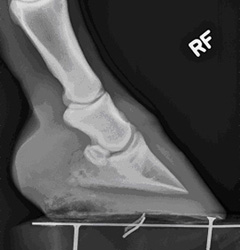 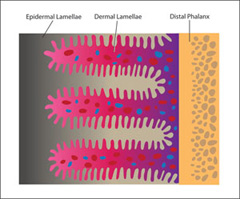 Laminitis (inflammation of the lamina of the hoof) is a common and potentially devastating foot problem that affects all members of the equine family: horses, ponies, donkeys, mules, and wild equids. The disease process involves a breakdown of the bond between the hoof wall and the distal phalanx, commonly called the coffin bone, pedal bone, or third phalanx (P3).

The distal phalanx/coffin bone in the horse is equivalent to the bone at the top of the human middle finger (Figure. 1a-drawing and 1b- radiograph). It is completely encased in the hoof. As with the human fingernail, the hoof wall is firmly attached to the coffin bone by a strong dermal-epidermal bond.

The hoof wall-coffin bone bond is the only thing that prevents the horse's body weight (approximately 500 kg or 1100 lb) from forcing the coffin bone through the bottom of the sole of the hoof. This bond must be strong enough to withstand the forces sustained by the hoof at a gallop, yet dynamic enough to allow the hoof wall to grow.

Because lamellae are formed by living cells with an extensive blood and nerve supply, the hoof wall-coffin bone bond is susceptible to a wide variety of systemic diseases that can contribute to the development of laminitis. 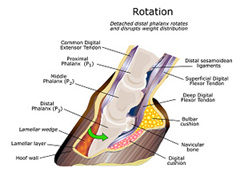 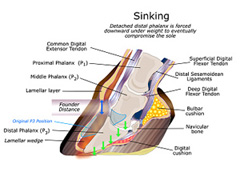 Signs of laminitis vary with the severity of the damage to the lamella and whether the laminitis episode is acute (hours or days old) or chronic (lasting more than a week). The most common sign that you would see is lameness ranging in severity from a minor head nod, to non-weight bearing and inability of the horse to stand up, having the appearance of walking on eggshells or saw horse stance An increase in digital pulse pressure in the arteries that supply the affected foot referred to as "bounding digital pulse" and/or the hoof wall feels warm/hot to the touch can also be a common finding as well, although not specific for laminitis. Laminitis most commonly occurs in the forelimbs and both forelimbs but can also occur in all four hooves, especially with circulating systemic disease.

Whatever the cause, if the lamella is sufficiently compromised, the coffin bone can:

1) Rotate downward within the hoof capsule, forcing the tip of the bone down onto the dermis of the sole and compromising the vasculature (blood vessels) in that area (Figure 3/rotation)  and/or

The hoof has an abundant supply of sensory nerve endings, so laminitis is a very painful condition. In fact, it is the extreme and unmanageable pain experienced by horses with severe laminitis that most prompts humane euthanasia in these cases. Other sequelae of severe laminitis that may worsen the prognosis for a good recovery include: 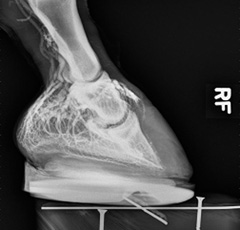 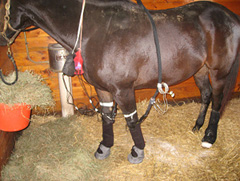 Laminitis is one of the most studied diseases of horses. Even so, there is still much we do not fully understand. Consequently, prevention and treatment of laminitis remain the challenge.

The period during which we have the greatest potential to influence outcome is before the horse even starts showing signs of foot pain (pre-emptive treatment). Cryotherapy (standing in ice boots) has been shown to be protective to the foot and a means of prevention (Figure 6).

Once the horse shows signs of laminitis, the destructive process is well under way and treatment becomes much more challenging with a variable outcome.

Your primary care veterinarian may recommend the following treatment options:

When to seek veterinary advice:

Typically once a horse develops laminitis and had recovered to a stable state, they will require special attention the rest of their life depending on how severe the overall clinical and radiographic signs are.

Your veterinarian may recommend the following types of long term care:

As with treatment and aftercare, prognosis is directly related to the underlying primary cause, clinical signs and severity of diagnostic findings. What is critically important is that the primary cause is corrected and the progression of laminitis becomes stabilized (i.e., is not progressively worsening). In mild cases, some horses may be able to go back to their previous level of work. More commonly, it is a best case scenario that your horse may eventually become pasture sound.  Often times and in severe cases, the clinical signs worsen and progression cannot be controlled. If uncontrolled, the severity of clinical signs worsen to where the horse may not be able to rise and either the tip of the coffin bone can penetrate through the bottom of the sole of the hoof and/or there can be complete detachment of the hoof from the underlying bone resulting in the horse “walking out of its hoof”. The most humane treatment option for the horse is euthanasia before the clinical signs gets even close to either of these points.

Potential complications following treatment for laminitis include, but is not limited to:

Back to large animal health topics