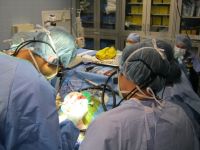 ​Membership in the ACVS is limited to those individuals who have achieved board certification from the ACVS. Requirements for admission to the College can be found in the ACVS Constitution and Bylaws.

The members of the College are referred to as:

These titles indicate that the individual has successfully completed a veterinary surgery residency program, have had their credentials application approved, have successfully completed the certifying examination and are members in good standing. Specialization in Large Animal Surgery or Small Animal Surgery was officially recognized for members board certified in 2004 and later.

Diplomates currently engaged in a graduate program leading to the PhD degree, or equivalent are eligible for a reduced dues rate. To be eligible, the Diplomate’s mentor must submit a statement verifying this status, with the dues payment.

Dues are prorated for the remainder of the year for new members. The ACVS office will convert active members to Emeritus members each year as part of the dues renewal process if year of birth is known.

All fees are non-refundable after the receipt deadline. Additional questions regarding dues should be addressed to the ACVS office.

The ACVS provides resources for Diplomates to promote their status as ACVS board-certified veterinary surgeons to the public and referring veterinarians. View Marketing Resources.